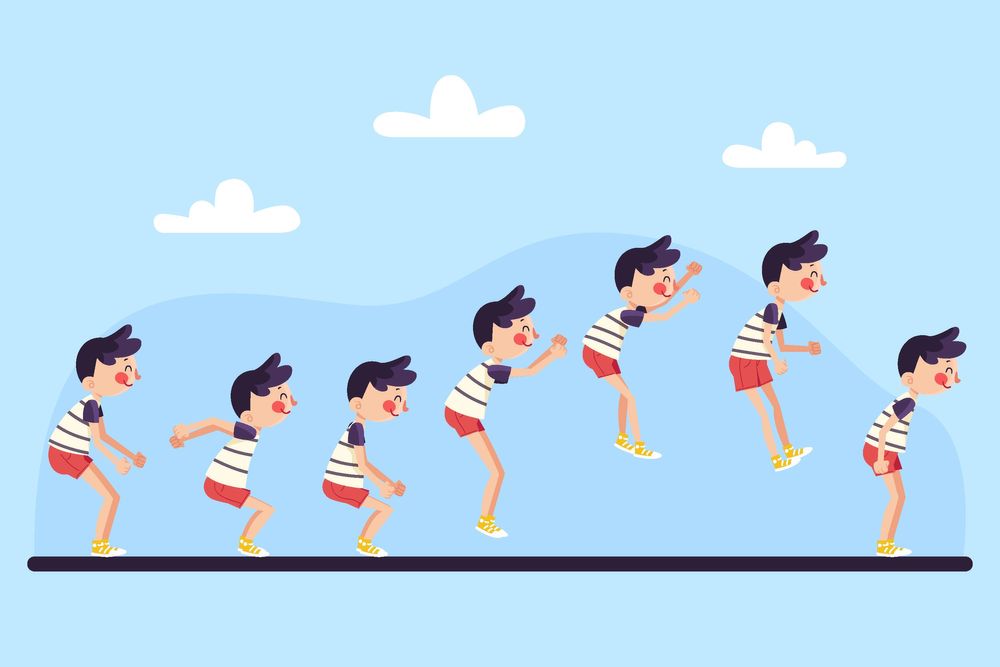 Have you ever heard about Disney's famous 'Nine Old Men'? They were all hired as chief animators during the 30s and 40s and worked together to bring the popular Disney Cartoons we love today. Two of these nine, Ollie Johnston and Frank Thomas, wrote a book in 1981, 'Disney Animation: The Illusion of Life' that first time talked about the 12 principles of animation. These principles of animation are the theoretical foundation for today's animators to follow. It is a great idea to enroll yourself to an online animation course for the upscale your learning to the next level.

What are the Principles of Animation?

What are the 12 Principles of Animation?

This principle denotes the illusion of an object's elasticity, flexibility, and volume. It is usually used to express the characters or the bouncing objects like balls being stretched while falling and squashed flat when they hit the ground.

There are a lot of squashes and stretch marks in real life that you might not even notice. For example, there is a lot of squeeze and tension on the face when someone speaks because the face is a very flexible area. In animation this can be overkill. Blinking and stretching can be done in many different areas of animation to add a more humorous or engaging effect, such as for eyes when winking or when someone is startled or scared.

This shows the preparation setup before action is about to happen. The squatting motion before the jump, swinging arm in a round motion before throwing an object, and stepping back before a football kick are all preparation or anticipation moments. This technique can also be used for less physical actions, such as a character looking out of the screen to anticipate someone's arrival or focusing attention on an object that the character is not aware of. items to be picked up.

Arrangement of the camera, characters' positions while they are moving, and changes in the background are all about the staging. Staging helps animators to direct the audience's attention to the focal point of their choice to make the storytelling impactful. Staging is one of the most overlooked principles. It should always be presented and easy to manner. The purpose of defining principles is to avoid unnecessary details and focus only on the important features. The main idea should always be clear and unambiguous.

Straight-ahead action deals with the linear path where each action frame is drawn. The first and last action is drawn in pose-to-pose, and then the middle frames are filled. Pose-to-pose gives you more control over the action. You can soon see where your character will be when it begins and ends instead of hoping you pick the right time. By doing the main poses first, you can quickly detect big mistakes. The problem is sometimes it's too clean and perfect.
The straight-line action is less planned, and therefore fresher and more surprising. The problem with that is that it's like running blindfolded. you can't know where you need to be at any given time.

It is used to show forward momentum. When a character is moving, the parts like hair, jowls, and clothing also move, which is the follow-through. When the character stops, the body parts follow through in overlapping action.
Follow through can also describe the movement of the main element. If you crouch to the ground after jumping, before standing up straight, that's a next step. These parts can be inanimate objects like clothes or car antennas, or body parts like arms or hair. In the human body, the trunk is the core, with the arms, legs, head, and capillary appendages often following the movement of the trunk. Body parts with a lot of tissue, such as a large belly and chest, or a dog's loose skin, tend to move more independently than bony body parts.

After starting a car, one doesn't instantly move 100/km. The car slowly picks up speed, and while stopping, it slows down and stops. These movements are mentioned in the slow in and slow out principle. The same has to be done in animation and the easiest way to achieve easy import and export is to use the spacing principle. When a character stands up from a sitting position, the distance between each pose will be closer at first so they can accommodate the movement. When standing up, they will step out of the movement by stretching the poses further at the end of the movement. Without this acceleration and deceleration, everything would have been very sudden and jerky.

This principle denotes smoothening of action while operating along a curved trajectory with timing and makes it feel more realistic and natural. In fact, people and animals move in arcs. The introduction of the concept of supply increases the realism. This principle of animation also helps us to realize realism through the movement of the bullet. Arcs running along a curved path add the illusion of life to an animated object in action. Without arcs, your animation will be stiff and mechanical.

Timing is about the marked places of action on a timeline. Timing is crucial to make an animation believable with its natural or unique action within a believable timeframe. In fact, the success of your animation will depend on your sense of time. Practice listening to the rhythm and timing of your animation. You'll see cases where a prank can be twice as funny if you just delay it by three more frames. Adding sound early is often helpful - whether it's music, vocals, sound effects, or all of the above - because the ear is more attuned to the complexities of time than the eye. It can also be a way to convey aspects of a character's personality. The speed at which the object moves greatly affects the animation. Speed ​​needs to be handled with care when creating animations.

The best example is a cartoon falling down a cliff, whose body parts simultaneously follow the gravitational pull. This adds more fun and appeal to the action. Magnification can be used to create extremely animated movements, including physical changes or supernatural elements. Or exaggeration can be combined with a little more restraint for more realistic actions. Even then, though, you can still use exaggeration to create movement that's easier to read or interesting while remaining true to reality. Exaggeration is a great way for animators to increase character appeal and enhance storytelling. Exaggeration refers to physical and emotional characteristics. In animation, we express emotions and feelings in exaggerated form to make them look more realistic.

Solid drawing is about the maintained accuracy of a character's or object's anatomy, weight, volume, and balance. In 2D animation, solid drawing involves creating an accurate drawing of the volume and weight, balance, shading, and anatomy of the pose. With 3D animation, animators need to think about how to position your 3D character to ensure proper balance and weight, as well as a clear silhouette. Solid drawing is about making sure that animated shapes feel like they're in three-dimensional space.

A character's charisma or appeal makes them fun, memorable, and interesting to watch. Play around with different character shapes and ratios to keep things fresh. Zooming in on a character's most prominent feature can go a long way in shaping their personality. Find a good balance between detail and simplicity. Attraction can be difficult to quantify because everyone has a different standard. That said, you can give your characters a chance to be more engaging by making them attractive to look at. The syntax or font style used should be understandable and appealing to the audience. Asymmetry and complex character designs should be avoided.

These were the 12 principles of animation that you need to learn, understand and excel at. We offer animation courses online with certification if you are interested in learning animation in detail.

Apparently there are no posts at the moment, check again later.

No results for your search, please try with something else.